I started riding horses back in January 2007, so it has been 9 years this year. Crazy. I graduated college in 2006 and thought about staying in crew. I almost joined Riverside Boat Club in Cambridge but got scared off by the cost and time. I was working in Cambridge and my cubicle neighbor owned a couple horses. I started riding at Harmony Horse Stables in Littleton MA. I still remember my first lesson on a chestnut thoroughbred named Penny Lane. There have been quite a few horses since, Flora & Squirt, Jolie & Ivy, Gemma, Acoya, Sterling, Sofie, Derby…..etc etc 🙂

When I was reflecting on my year, I couldn’t help thinking about horses. I moved this year up to NH and had to leave my barn, Orchard Hill Equestrian Center, where I had been riding since 2010. I started riding at OHEC for a mare named Cheval, Chevie for short. She was a huge white percheron/TB cross that I leased for about a year. She was sold and then I basically have just been riding school horses ever since. This past May, a very special horse became a school horse named Beau. He was/is my dream horse. Forward with a big floaty trot, rhythmic rocking horse canter. He’s a big Oldenburg, early teens. Ground manners and manners on the cross ties aren’t great but he is perfect under saddle. I actually just heard on Friday night that two instructors have sadly labeled him as an unsafe liability because of his ground manners. The real issue is that becoming a school horse has led to some bad habits. He has learned that because of his size, his beginner/inexperienced riders are scared off when he makes a big fuss on the cross ties. It is unfortunate because what I see is a horse that would really benefit from a consistent, confident rider…not a rider who shows up for their one ride a week that doesn’t want to deal with a problem horse. The life of a school horse. 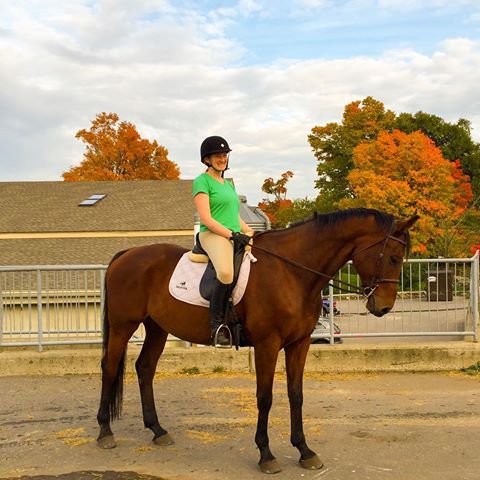 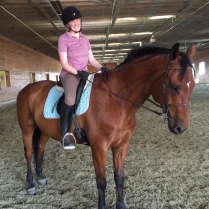 When I moved, I was so sad to leave my barn and all the amazing friends I had made there and become accustomed to seeing every week. The family that owns that barn is very near and dear to my heart. I love going down to MA to see them. When I was going through my divorce, I actually lived in one of the apartments on the property while we sorted out housing. These people are seriously solid people. I was also sad to leave Beau, wondering what the next horse I would find to ride would be like.

I ended up hitting the jackpot. I found a small quiet farm near the new house and the horse I have been riding since September is named Chandraki. He is a Georgian Grande; an interesting breed that is half friesian, a quarter saddlebred, and a quarter draft, in Draki’s case his grandfather was a percheron. He is safe, likes the ring and the trails, and is a beautiful mover. The catch is he can be lazy, and he can be a bully. He has really forced me to be an assertive rider that uses spurs and a dressage whip when he isn’t listening. This assertiveness has been tough for me, a person who usually shies away from confrontation. Not surprisingly, this new attitude while riding has bled in my life a little, making me a more confident and assertive person. When faced with adversity, I can’t help but think, hey, I pay someone to fight with a 1000+ lb animal….what do you got!? 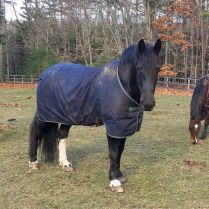 I have learned so much about riding, and really myself from riding Chandraki. This weekend we took a lesson with Adam Cropper, a dressage trainer who helped Chandraki’s owner when she first got him. It was a really great ride for us, and a great confidence booster for me. Oh and of course Chandraki is so handsome and extremely respectful yet affectionate on the ground…so there’s that 🙂 His owner has used him for eventing as well as fox hunting, and he has a real talent for dressage. I am hoping he will be one of the best parts of 2017. We’ll see!