Before the automobile, there were many grand hotels and boarding houses in the White Mountains, called the Great North Woods back then, where people from the cities in Massachusetts would stay for a month or two in the summer for some fresh air and recreation. The Mt. Washington wasn’t open in the winter until 2000. They would arrive by trains and ‘tallyhos’ which were horse drawn carriages. It took so long to get anywhere, you would stay longer. The Mt. Washington Hotel broke ground in 1900 and opened for guests in 1902. It was built by Joseph Stickney, who also owned the Mt. Pleasant Hotel (which is now where the Lodges at Bretton Woods are) across the street.

It is breathtaking, the largest wooden structure in New England, all white exterior with that bright popping red roof against the most beautiful backdrop- the Presidential Mountain Range. I have driven by the hotel many times in my hiking adventures, and looked down upon it from many peaks in the area. Last week was the first time I actually stayed there, and honestly I could have moved in. We stayed Wednesday night and Thursday night, and it was really great being there midweek. It was a lot less crowded from what I have heard. There was rain on Wednesday, but Thursday and Friday were gorgeous. Wednesday night we sat out on the veranda overlooking our beloved mountains. They sat tucked under a blanket of clouds until the sun set and the alpine glow set in. We went to dinner that night at Stickney’s, a restaurant in the lower level of the hotel that used to be the men’s billiard room back in the day. After, we had a couple drinks in The Cave, a space that was originally squash courts that became a speakeasy during Prohibition years. They drank from tea cups and had a view out the window to the driveway to see if any officials were coming up.

Thursday we hiked Zealand Mountain which was fantastic because it was only 15 minutes from the hotel. I will write up the hike in a separate post 🙂 Thursday night we did a little fly fishing in the trout pond out front before eating out on the veranda. After, we got a couple glasses of champagne, a book titled A Self Guided Historic Tour, and meandered around the hotel.

Friday we had breakfast and took a last lap around before heading out on a couple more adventures. We went to the Gale River right by the trailhead to hike Galehead and I happily read my new book, Kaysen’s Cambridge, while my husband caught around 5 brook trouts. From there we went to the Bretton Woods ski area and took the free ski lift up to the Latitude 44 restaurant. Bretton Woods is a part of the Omni Mt. Washington Resort as is the hotel. The view from the restaurant looking across to the hotel and the mountains was beautiful. What a great ending to our trip. 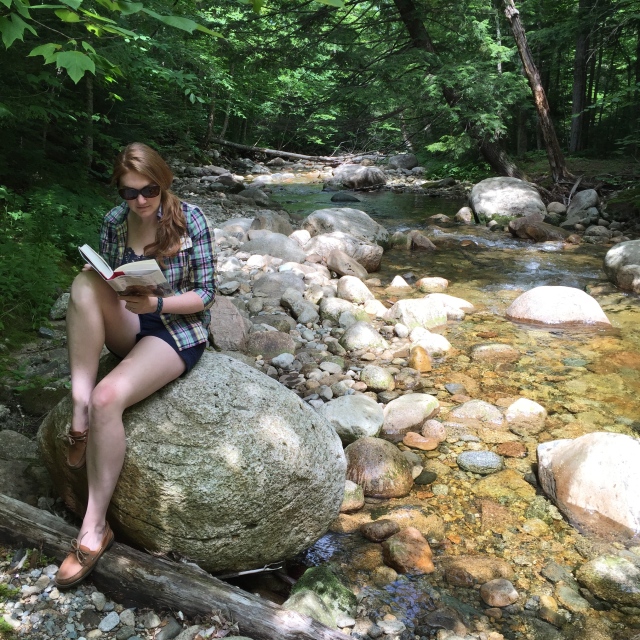 It was an amazing place to stay. So many families and couples there were taking the cog railway up Mt. Washington, or driving up during their vacation. I heard excited children talking about their upcoming journey, parents telling them about the wind, or the pizza at the top! I have hiked all the Presidentials, and I will never forget hiking up Mt. Washington. A day in March when the world up there was still snow-covered and barren. The pizza wasn’t open, and there was no wind. It’s a beautiful place no doubt, but looking up from the plush cushions on whitewashed veranda wicker furniture to see mountains that you regard as familiar friends as opposed to awesome strangers is truly a gift.

One thought on “The Grand Mt. Washington Hotel”