This past Saturday, one of my fiancé and I’s friends came out to visit from Boston. He got a zip car and everything, so awesome. The weather could have been better, but it wasn’t raining thank goodness. We took Mizpah, our pup, to an off leash trail area nearby which was such a nice start to the day. Mizpah is so happy running through the woods, and its so beautiful & peaceful there.

Then we headed to one of the many apple orchards in central MA. This particular one is just pick your own apples, some have cider and apple cider donuts, some have full country stores. In the area that I live there is literally an apple orchard every 5 miles or so. We like to check out all the different orchards, but this year we hit up Doe Orchards in Harvard MA because it allows dogs on a leash! Our favorite apples are cortlands, and we got some honey crisps for my sister. We eat an apple a day, and I only like to get my apples from local orchards in my area. I have been burned getting apples at the grocery store. Nothing sadder than biting into a bad apple. Cortlands are awesome for eating & baking, can’t wait to make apple crisp! 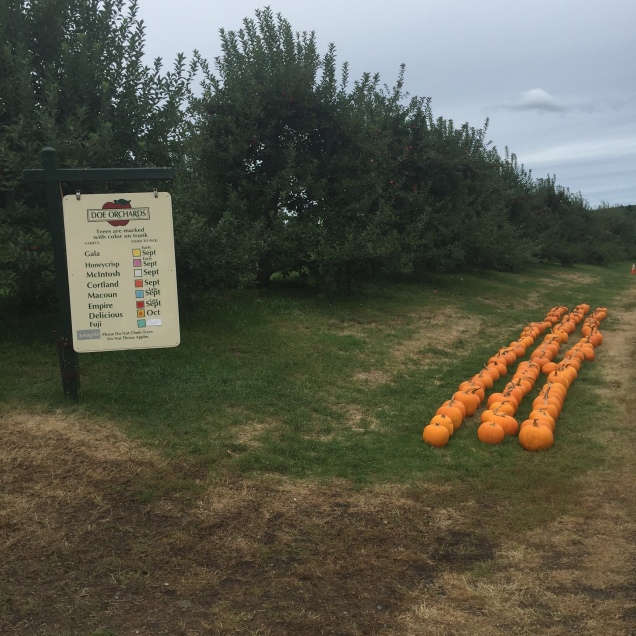 Color coded key for all the apple varieties & pumpkins 🙂

Part of an older cortland tree

After apple picking, we grabbed some lunch, and then headed to Wachusett Brewery in Westminster MA. Wachusett was founded by three WPI graduates, and their brews are served all over Worcester, and really all over New England now. They have a beer honoring the Red Sox, Bruins, Larry Bird of the Celtics, and so many more. We brought our two growlers to fill up with Nut Brown Ale and Black Shack Porter and in the meantime we sampled some beers! So good. Don’t get me wrong, I love a glass of wine or champagne just as much as the next girl, but I also love good beer. Going to school at WPI, we often went to The Boynton Restaurant and one of the cool things they did was put actual blueberries in the Wachusett Blueberry. Its the only blueberry beer I will drink 🙂

Apple picking is a very affordable fall activity. We got a huge bag of apples for $13 and we know that money is going right to the people that run the orchard. Doing growlers at your local brewery can be huge for savings. At Wachusett I believe we paid $25 for a growler and then refills are $7. Good deal for a half gallon of beer right from the tap at the brewery! Love finding affordable fun things to do on the weekend 🙂

Cheers to getting through Monday!!