Saturday afternoon, I had the privilege of being the designated driver, beer taster not guzzler, for 5 breweries in southern NH!! My fiance, Jon, and another couple who we are close friends with were my copilots!

Our first stop was 603 Brewery in Londonderry, NH. They were the first stop because they close the earliest at 5 on Saturdays. Beers from this brewery are pretty widely available now in our area BUT we wanted to try a new beer called ‘Black Ice’, and they were having a competition for three different Winter Wheat beers to try and vote for. They also had their Granite Stout on nitro which was cool. The tasting area at this brewery is in the same room as all the brewing equipment, so you really are in the midst of it all. They do what they call a placemat tour where you pick 5 beers to sample and they are placed on a tray with a dish of spicy cheddar popcorn and a pint glass all for $10. They tossed in their pumpkin beer as a freebie. Their beers have great NH themed names, similar to how Woodstock Station Brewery names their beers. My favorites from 603 are the Winni Amber Ale named for Lake Winnepesaukee and the White Peaks IPA named for the White Mountains. 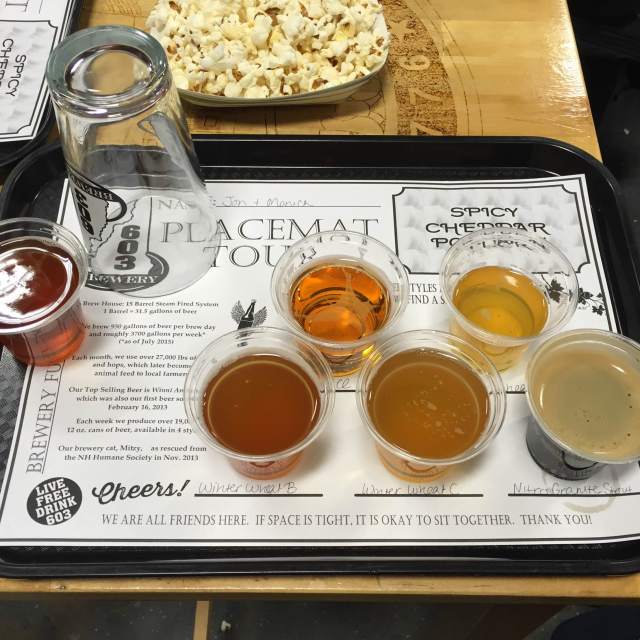 Next up was the Great North Aleworks in Manchester which also closed at 5. I had never even heard of this one. We just randomly decided to hit this one up because it came up on our google maps! Their logo was pretty cool, a G and an N configured to look like mountain peaks. They offered some different food items for a fee, some snack foods and a cheese & cracker board. They had five beers on tap, and so our sampler of five had all their beers for the day. I loved their vanilla porter and chocolate milk stout! They had a rauchebier which has a very smoky flavor and an IPA that my fiance liked. They have an amber lager that I didn’t really like, it didn’t have the balance of malts to hops that I like, too sweet and malty. 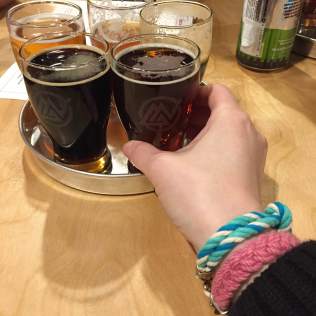 Next up was Kelsen Brewing Company back down in Derry, NH. They have a tasting room, very small, and they close at 6. They had 4 beers for us to try, the Battle-Axe IPA, Draken Porter, Paradigm Brown Ale, and the Vendel Imperial Stout. My favorites were the Battle-Axe and the Draken. The beer names/logos and their decor is all very ancient military driven…..think like soldiers of Sparta and Vikings. One wall of the tasting room is this amazing chalk mural. It was pretty cool.

Pretty much down the street from Kelsen was the Rockingham Brewing Company in Derry, NH and they close the latest at 7. They had eight beers to try so we did two five beer samplers #1-5 in one, and then #4-8 in the other. The logo for this one is a pig in a rocking chair! Get it? A rocking ham!? Loved it, their van’s license plate was ‘HamVan’. So clever. They had an awesome beer called Belly of the Beast that was really malty, smoky, and had a bacon taste to it. They also had a great Belgian dubbel called Cloven Hoof that I loved. We dubbed this one the hidden treasure. We had never seen these beers and they were all delicious. 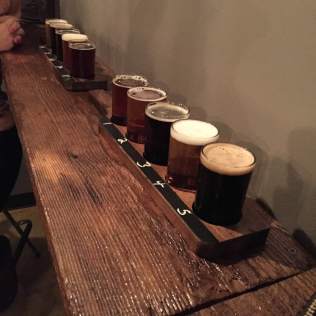 Last stop needed to have food!!! We hit up Martha’s Exchange in Nashua, NH for dinner and a final sampler flight. They have amazing food- love their clam chowder and french fries. We went here a couple months ago and none of the beers they had on tap are still there, all new beers! I loved the Abbot’s Habit, a Belgian tripel, and their Arkenstone Amber because its nicely balanced with malts and hops. On the way out, they have an awesome sweets counter where I grabbed a couple truffles, so delicious! 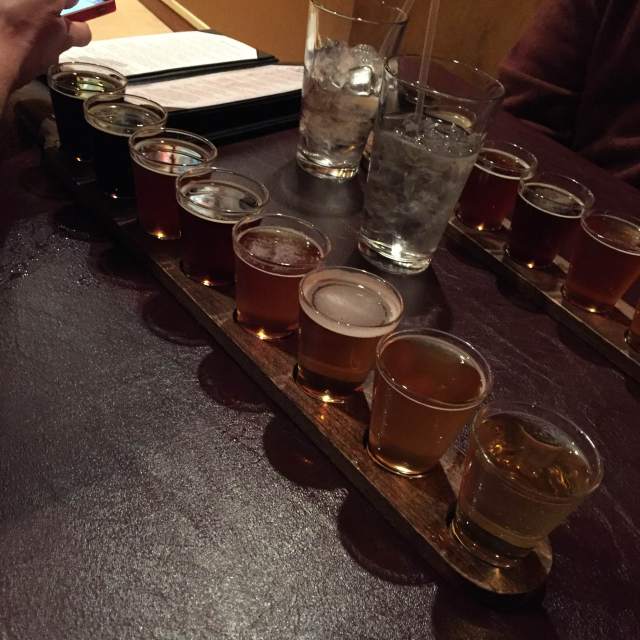 I always have a lot of fun being the DD for an excursion like this because I am just the type of person who likes to try the beers, not drink all of them. Volume wise, the samplers aren’t that much beer, BUT the variety of beers might mean higher alcohol beers that pack a bit more punch than others. Plus, I will admit it, I am a control freak when it comes to my own body. I honestly don’t like feeling drunk and not in control of my body. The things you learn by the time you are 32….. 🙂

New England is the home to soooo many craft micro-breweries. I couldn’t believe there were three just between Londonderry & Derry, NH. We have a lot of fun traveling around trying different beers and supporting local breweries. So much heart goes into these smaller breweries….the people you talk to when you get your beers are often the brewers and when you bring your glasses back up, they ask how you liked them and really care about your opinions. Definitely a fun way to enjoy an afternoon with friends!